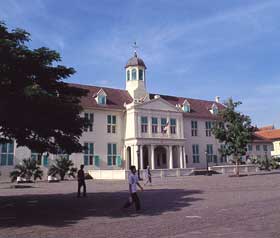 The first known hominid inhabitant of Indonesia was the so-called “Java Man”, or Homo erectus, who lived here half a million years ago. Some 60,000 years ago, the ancestors of the present-day Papuans move eastward through these islands, eventually reaching New Guinea and Australia some 30-40,000 years ago. Much later, in about the fourth millennium B.C., they were followed by the ancestors of the modern-day Malays, Javanese and other Malayo-Polynesian groups who now make up the bulk of Indonesia’s population.

Trade contracts with India, China and the mainland of Southeast Asia brought outside cultural and religious influences to Indonesia. One of the first Indianized empires, known to us now as Sriwijaya, was located on the coast of Sumatra around the strategic straits of Malacca, serving as the hub of a trading network that reached to many parts of the archipelago more than a thousand years ago.

On neighboring Java, large kingdoms of the interior of the island erected scores of exquisite of religious monuments, such as Borobudur, the largest Buddhist monument in the world. The last and most powerful of these early Hindu-Javanese kingdoms, the 14th century Majapahit Empire, once controlled and influenced much of what is now known as Indonesia, maintaining contacts with trading outposts as far away as the west coast of Papua New Guinea.

Indian Muslim traders began spreading Islam in Indonesia in the eighth and ninth centuries. By the time Marco Polo visited North Sumatra at the end of the 13th century, the first Islamic states were already established there. Soon afterwards, rulers on Java’s north coast adopted the new creed and conquered the Hindu-based Majapahit Empire in the Javanese hinterland. The faith gradually spread throughout archipelago, and Indonesia is today the world’s largest Islamic nation.

Indonesia’s abundant spices first brought Portuguese merchants to the key trading port of Malacca in 1511. Prized for their flavor, spices such as cloves, nutmeg and mace were also believed to cure everything from the plague to venereal disease, and were literally worth their weight in gold. The Dutch eventually wrested control of the spice trade from Portuguese, and the tenacious Dutch East India Company (known by initials VOC) established a spice monopoly which lasted well into the 18th century. During the 19th century, the Dutch began sugar and coffee cultivation on Java, which was soon providing three-fourths of the world supply of coffee.

By the turn of the 20th century, nationalist stirring, brought about by nearly three centuries of oppressive colonial rule, began to challenge the Dutch presence in Indonesia. A four-year guerilla war led by nationalists against the Dutch on Java after World War II, along with successful diplomatic maneuverings abroad, helped bring about independence. The Republic of Indonesia, officially proclaimed on August 17th, 1945, gained sovereignty four years later.

During the first two decades of independence, the republic was dominated by the charismatic figure of Sukarno, one of the early nationalists who had been imprisoned by the Dutch. General (ret.) Soeharto eased Sukarno from power in 1967. Indonesia’s economy was sustained throughout the 1970’s, almost exclusively by oil export.

The Asian financial crisis, which broke out in mid-1997, paralyzed the Indonesian economy with the rupiah losing 80% of its value against the US dollar at the peak of the turmoil.

On May 21, 1998, Soeharto resigned after 32 years in power and was replaced by B.J. Habibie following bloody violence and riots. Indonesia held its first democratic election in October 1999, which put Abdurrahman ‘Gus Dur’ Wahid in the role of president.